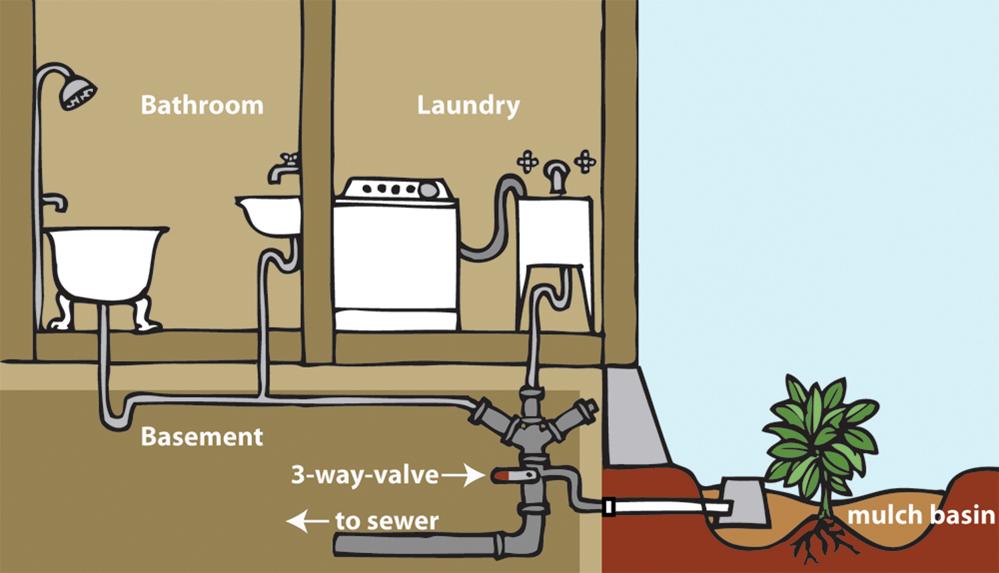 About 10 Santa Venetia neighbors met at Le Chalet Basque Wed., Sept. 24, to learn how to stay green with graywater.

Organized by neighbors Kathleen Nemetz, Certified Financial Planner™ practitioner, and Realtor® Yvonne Young, the meeting was the second Neighborhood Connections meeting to be co-sponsored with the Santa Venetia Neighborhood Association.   Many of the 10 people who came are already experimenting with graywater  systems in some form, judging from the questions that arose.   Presenter Brian Murphy of The Urban Farmer Store in Mill Valley ran down a checklist of what to do – and not to do – to minimize system costs and problems.

Most important, he said, would be to avoid adding features that would require taking a county building permit. “These can add thousands of dollars for benefits that may not justify the cost,” he said.

Demonstrating with a show and tell display of PVC pipes, valves, and valve covers, Brian mostly focused on laundry water.  However his firm also helps homeowners redirect water from showers and sinks.  He said it is important to comply with local environmental safety regulations meant to avoid backflow into the public water supply.

“While it’s unlikely this may occur, if you are setting up a simple gravity feed into the garden,” he said, “you need to be really sure – by complying with the local regulations.”

The Urban Farmer Store supplies helpful advice and supplies for the do-it-yourselfers who want to redirect the up to 55 gallons going from the washing machine into the sewer into the garden instead. Urban Farmer also helps people set up rainwater catchment systems to repurpose roof runoff, for irrigation, emergency water supplies or groundwater recharge.

A rainshower dropping 1 inch of rain on a 1,000 square-foot roof can generate 600 gallons of water;  too much for the average home to store over the course of an average rainy season, he said. However a portion of the water can be captured and reused as needed later, freeing up capacity to capture more water with the next rain.

The average vegetable bed needs 1,300 gallons or more of water to sustain itself during the growing season. Perforated PVC pipe inserted into boring holes can sustain trees, when filled with the recycled water. PH adjustments can be made as necessary of water distributed, as the speakers demonstrated.  Use of portable or fixed pumps for graywater is usually not permissible , however, without asking the county for a permit, he said.

Northbridge homeowner Tom Yocom reported that he has a perched water table that is close to the surface in some areas of his yard, but deep in other areas, most likely resulting from variable clay layers that are part of the alluvial deposits from streams and runoff that flowed through the neighborhood historically.  He thinks this perched water table could be a secondary source of water for garden irrigation.

This site uses Akismet to reduce spam. Learn how your comment data is processed.